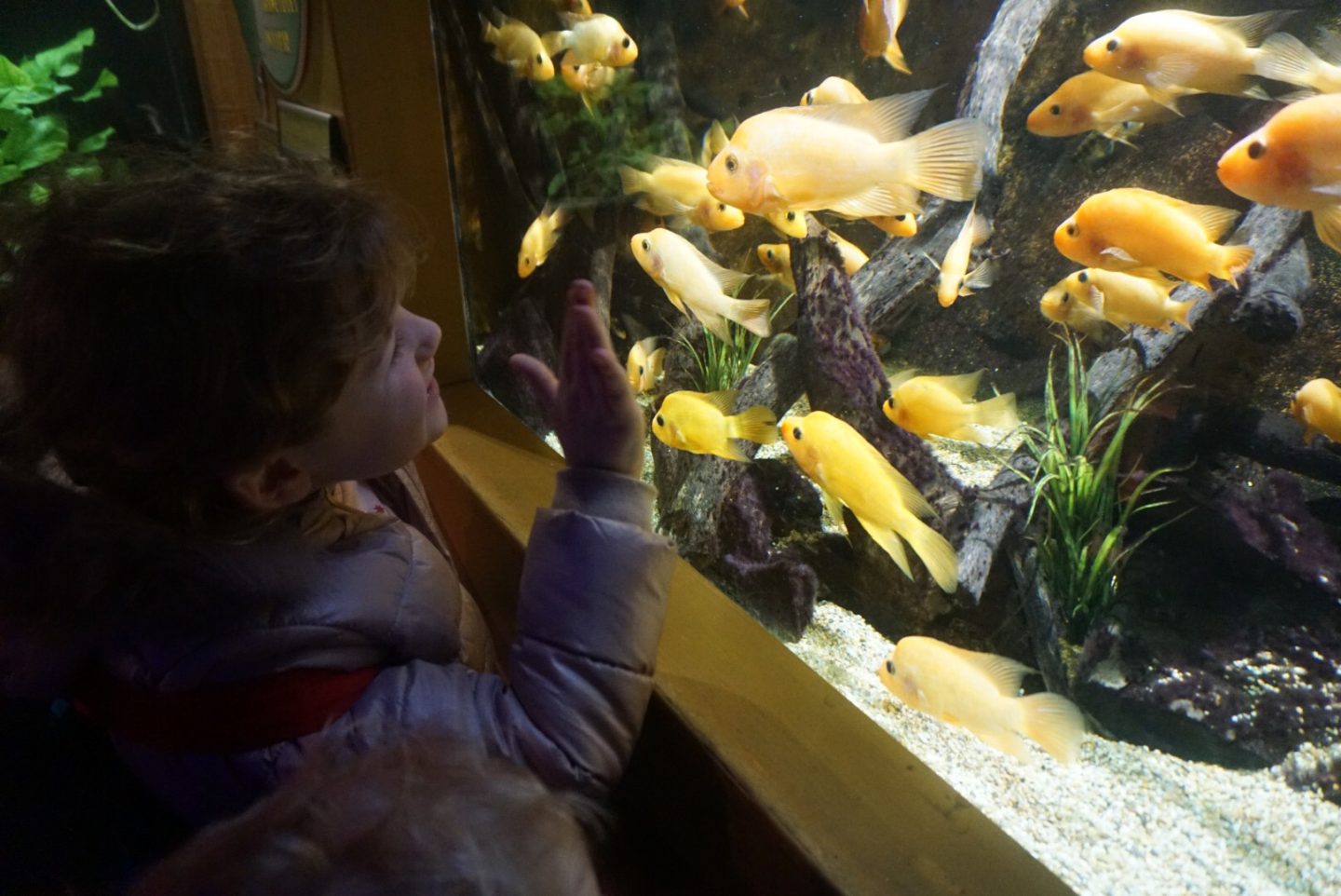 Over the weekend, we set aside a full day to go out and explore.  Having a clear day excites me as it means there are no time restrictions, sometimes it can get pretty tiring running from one thing to the next.  I am huge on timekeeping and Hubs not so much, which means the potential for a row is always higher.  I think it’s really important to get away from the job lists, housework, screens and have a good laugh in a new environment.  Laughter, fun and screen connection is so important for the mental well-being of all ages.  The rules are that the phones go away for the day.  I can take a few 20 second stories if I am doing a review or want to tell others about a great place, but I normally shoot them and upload the stories later.  Cameras are allowed, but they too have their place and need to be put away after the odd quick snap.  I adore taking pictures and memories are really important to me so the camera will never be left at home.

A trip to Deep Sea World has been on the cards for a while and the kids were super intrigued and excited when I explained we would be seeing sharks.  When we arrived, both kids were feeling a bit nervous and Bonnie even more so when she saw the dark pathway down towards the aquarium.   I think it’s important that we encourage our little people to try something new and break free from those comfort zones.  Even if it is a bit scary.    It turns out we would tackle two of Bonnie’s fears – sharks and tunnel water flumes, which I happen to totally love.

There were loads of activities on throughout the day, including shark feeding and seal feeding.  The kids were mesmerised by the dancing seals.  They performed lots of tricks and even gave each other kisses.  Not dissimilar from the kids when they want chocolate, they can be easily bribed.  The feeding show had the proper ‘feel good’ factor.  I can tell Bonnie is impressed once she gets the camera out.  She was even prepared to dangle it over the water to get the right angle. 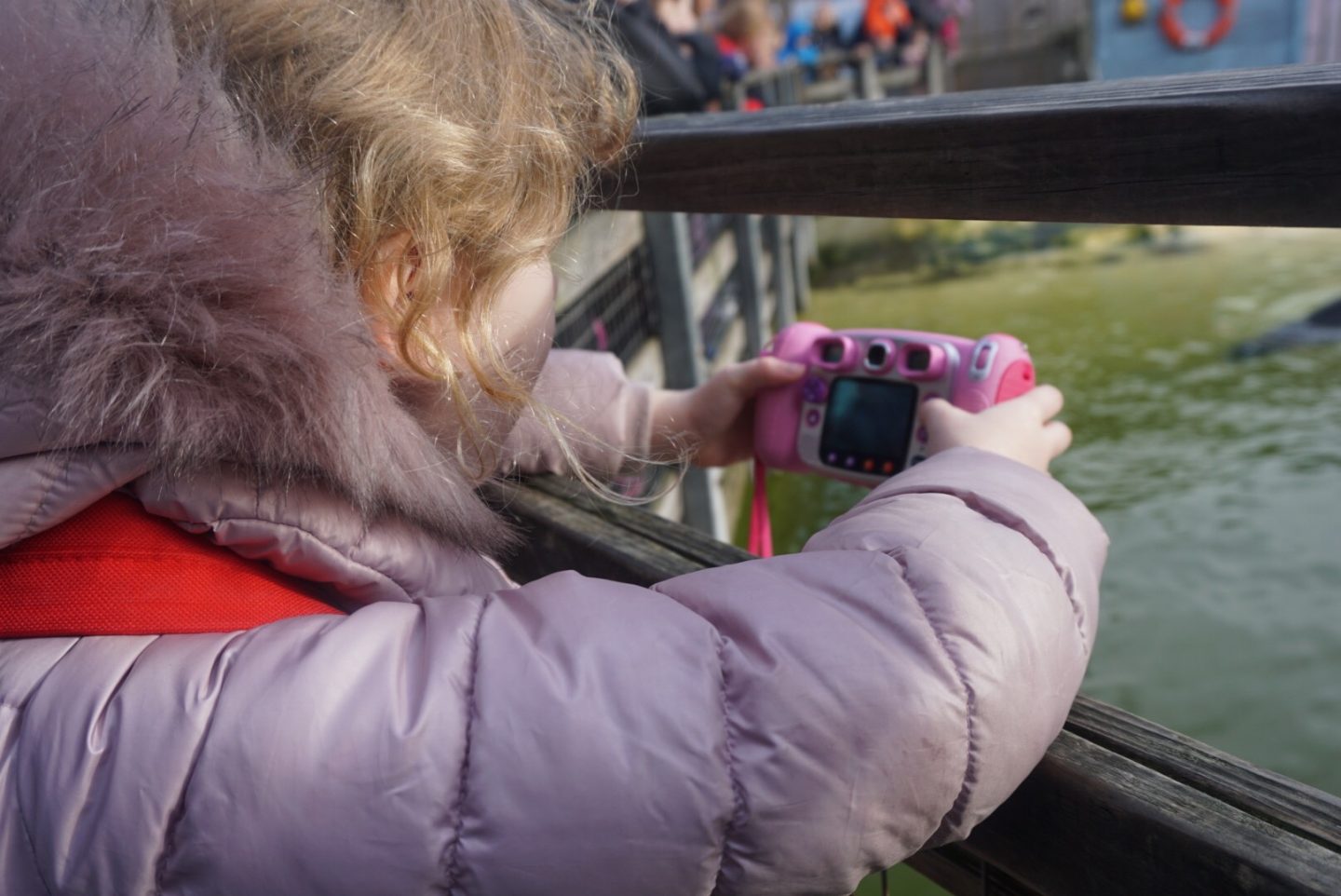 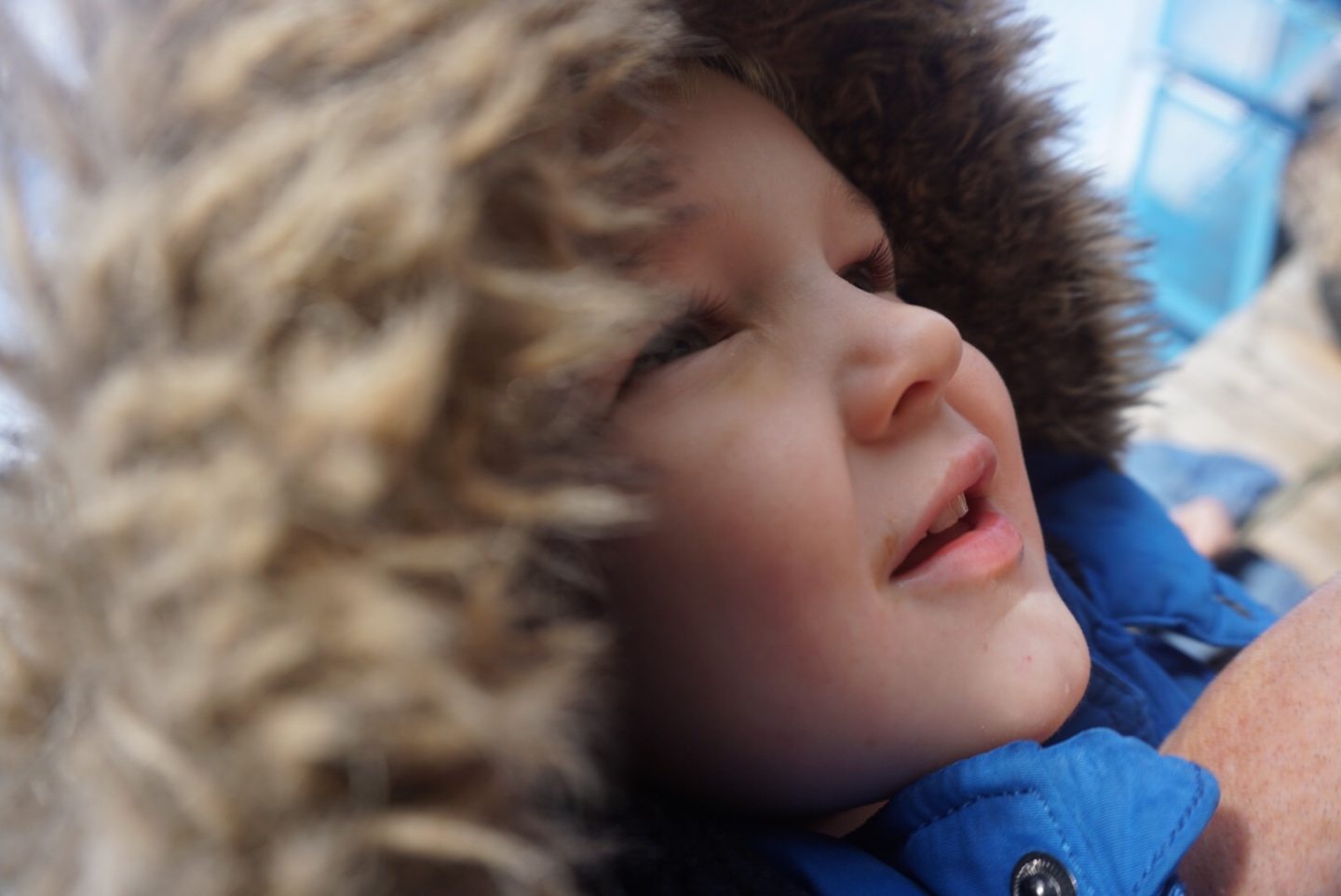 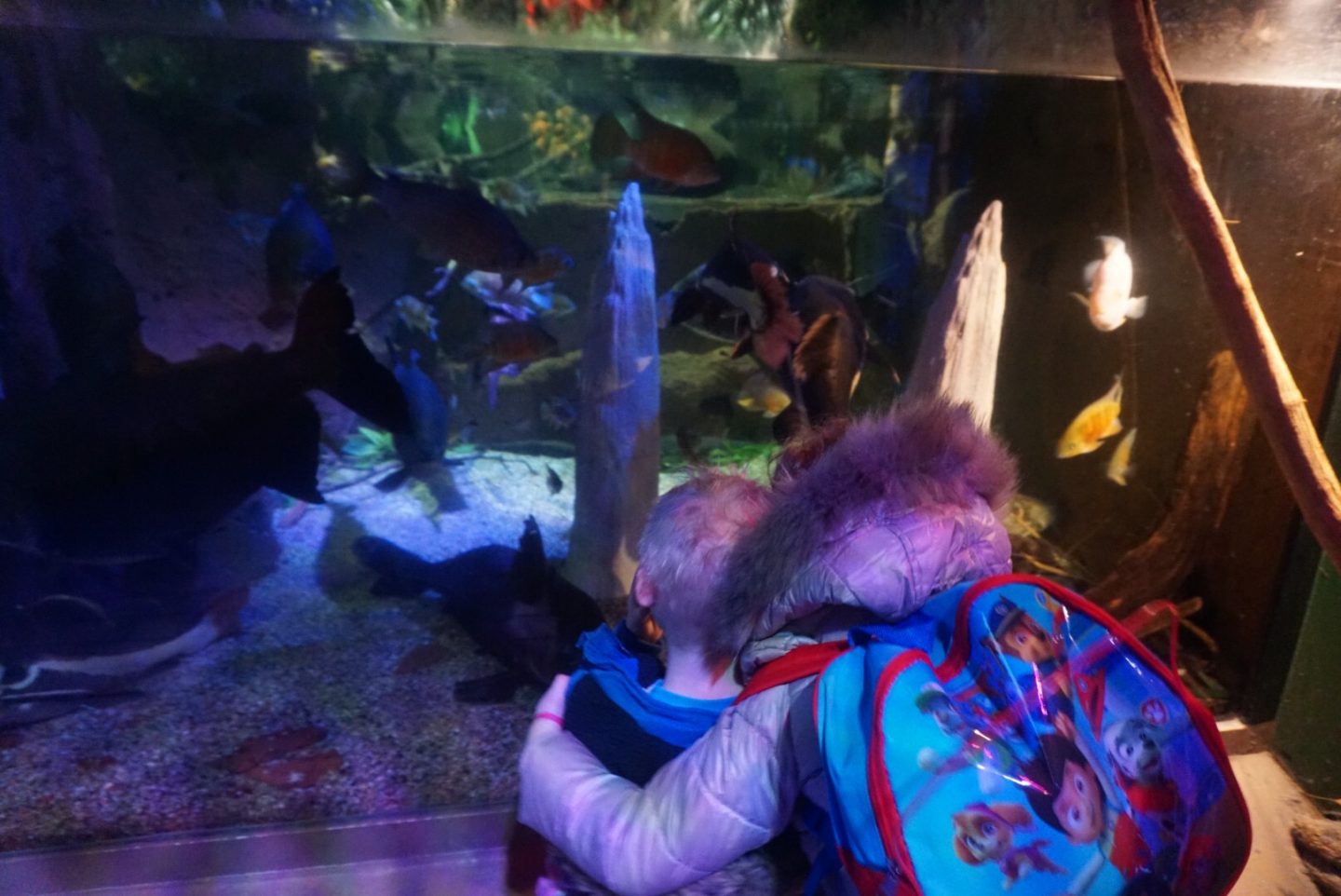 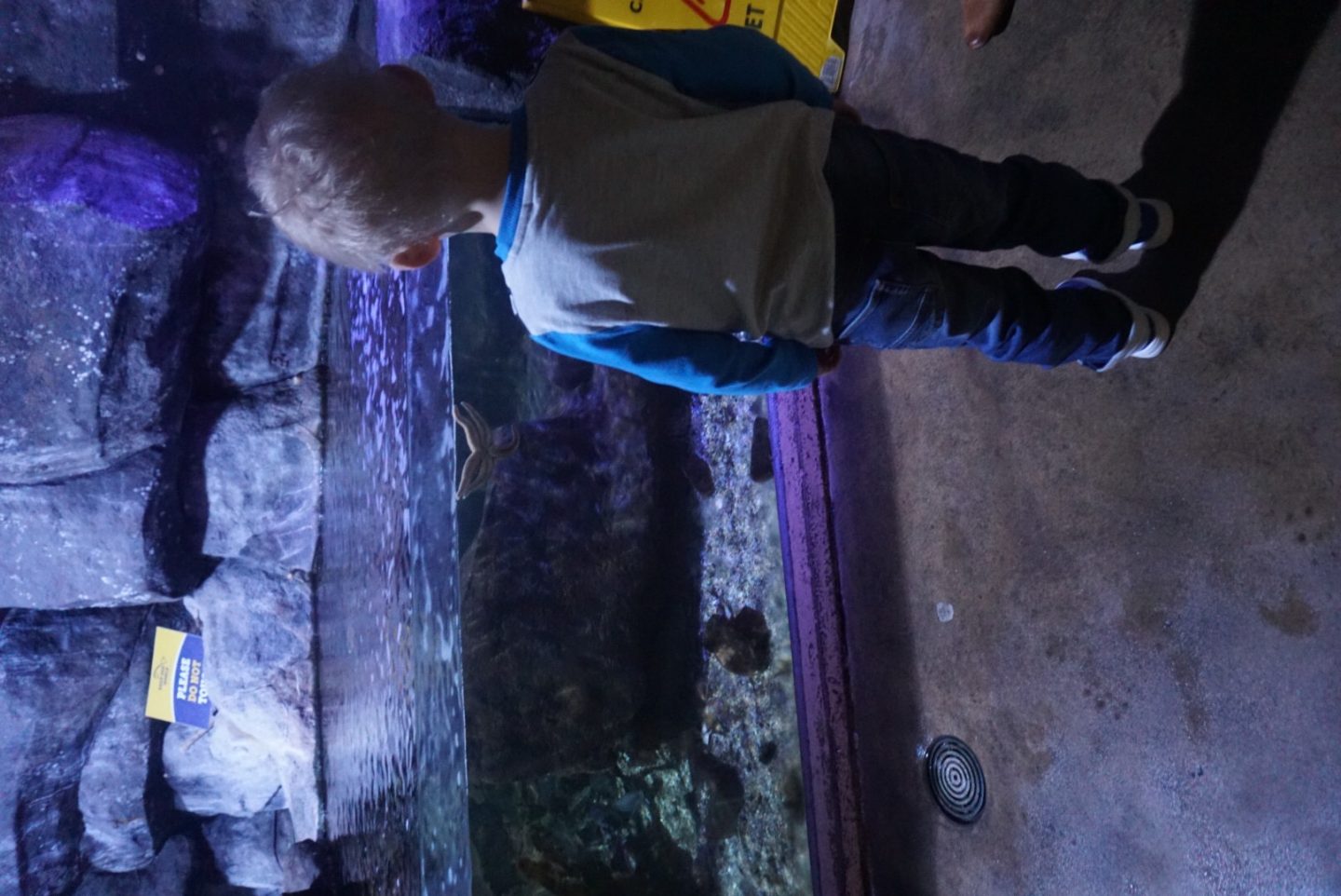 There are loads of amazing fish to look at but my favourite part has to be the aquarium.  I have never been so close to a shark and seeing those big teeth right next to me was fairly surreal. 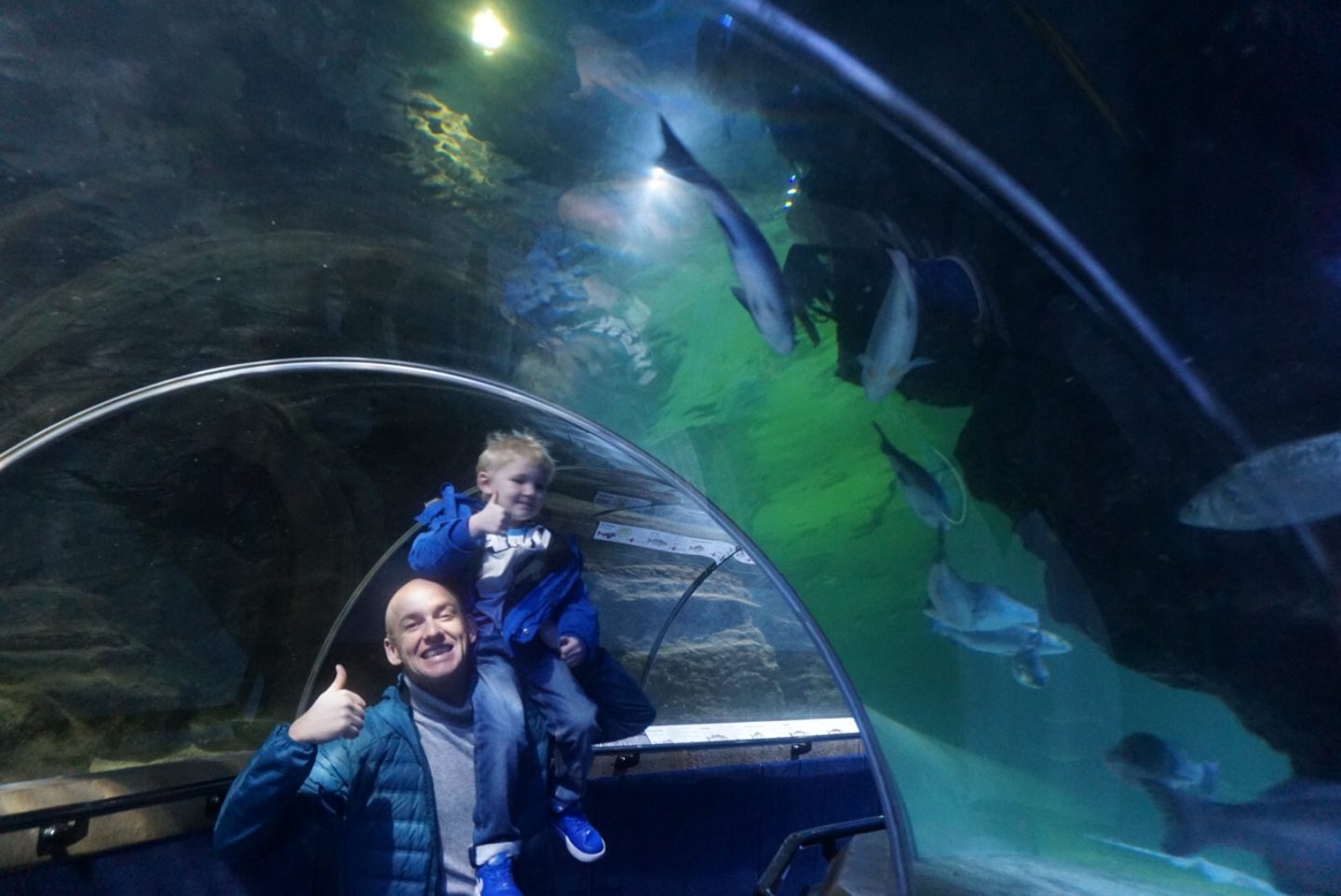 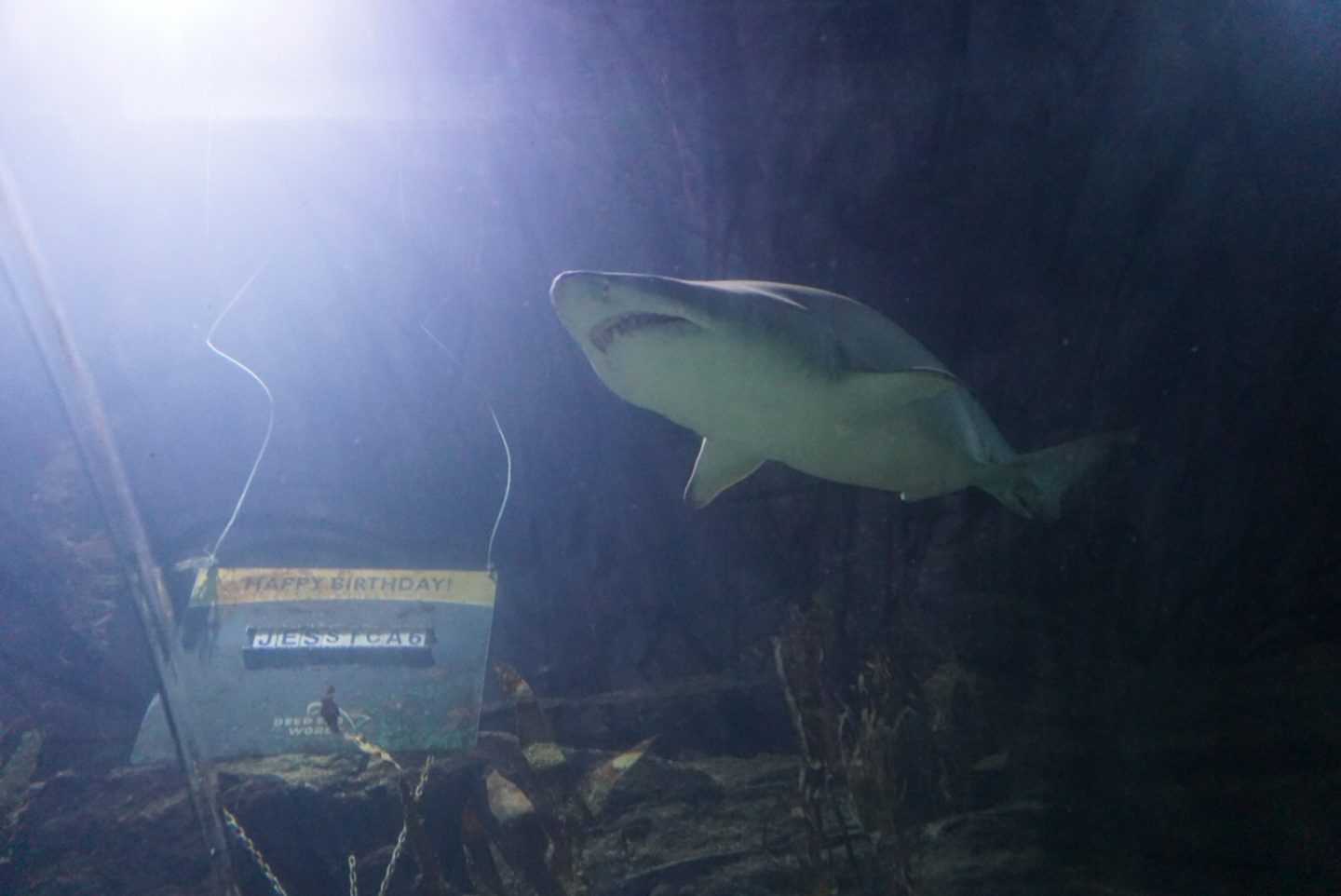 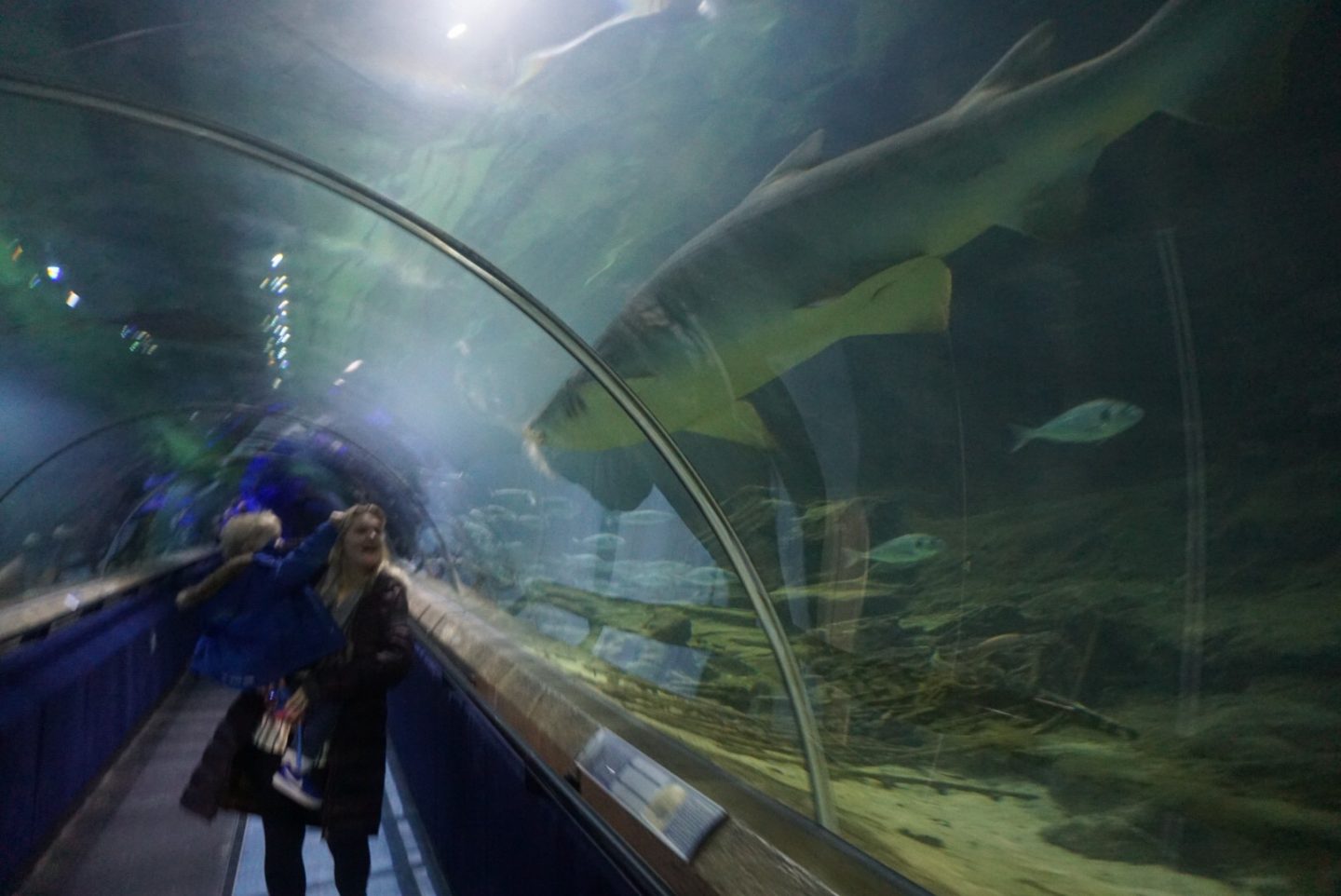 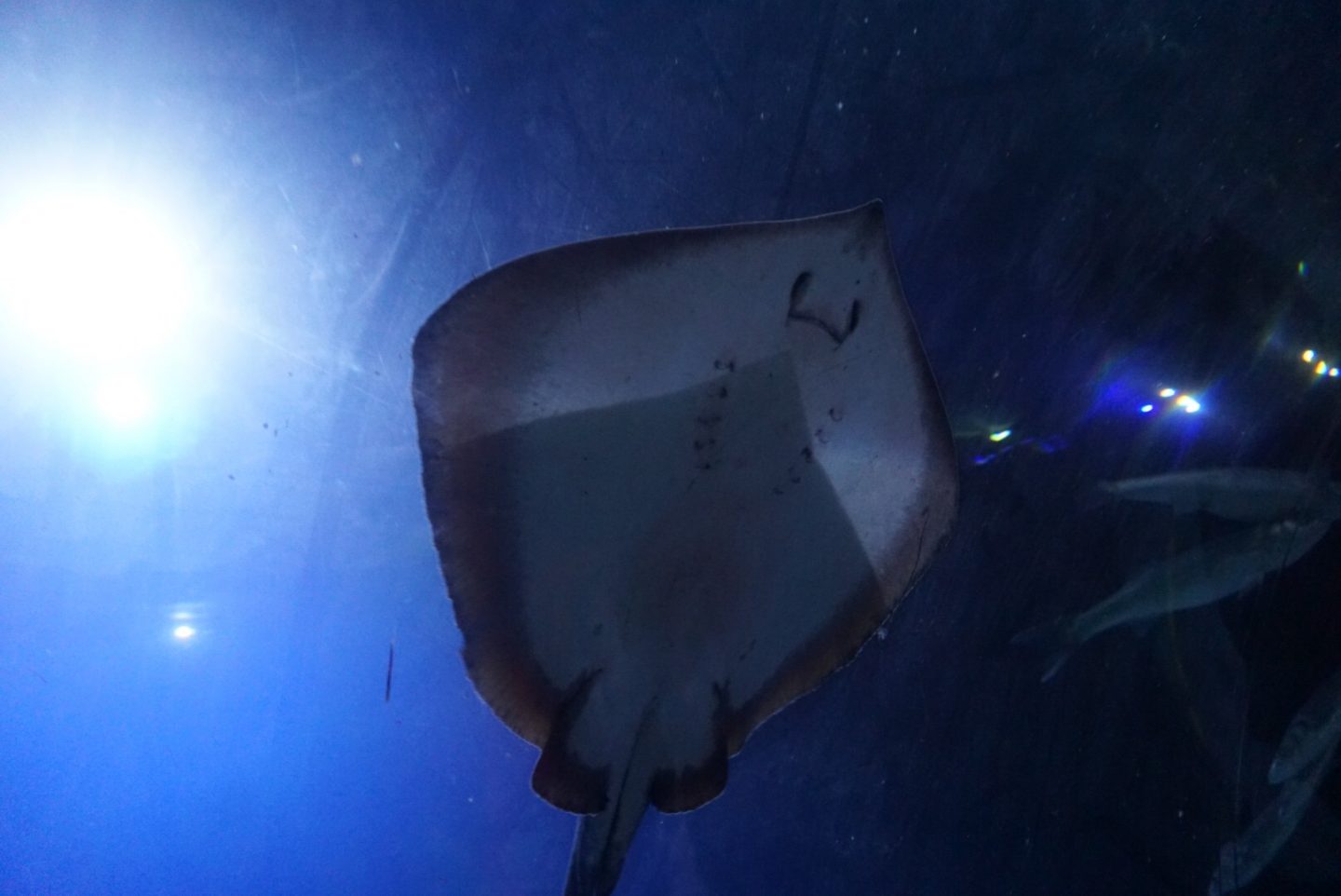 Also, check out this little frog.  Very cute but also very poisonous.  A nice reminder for the kids that looks can be deceiving and we should always be more concerned with what is on the inside. 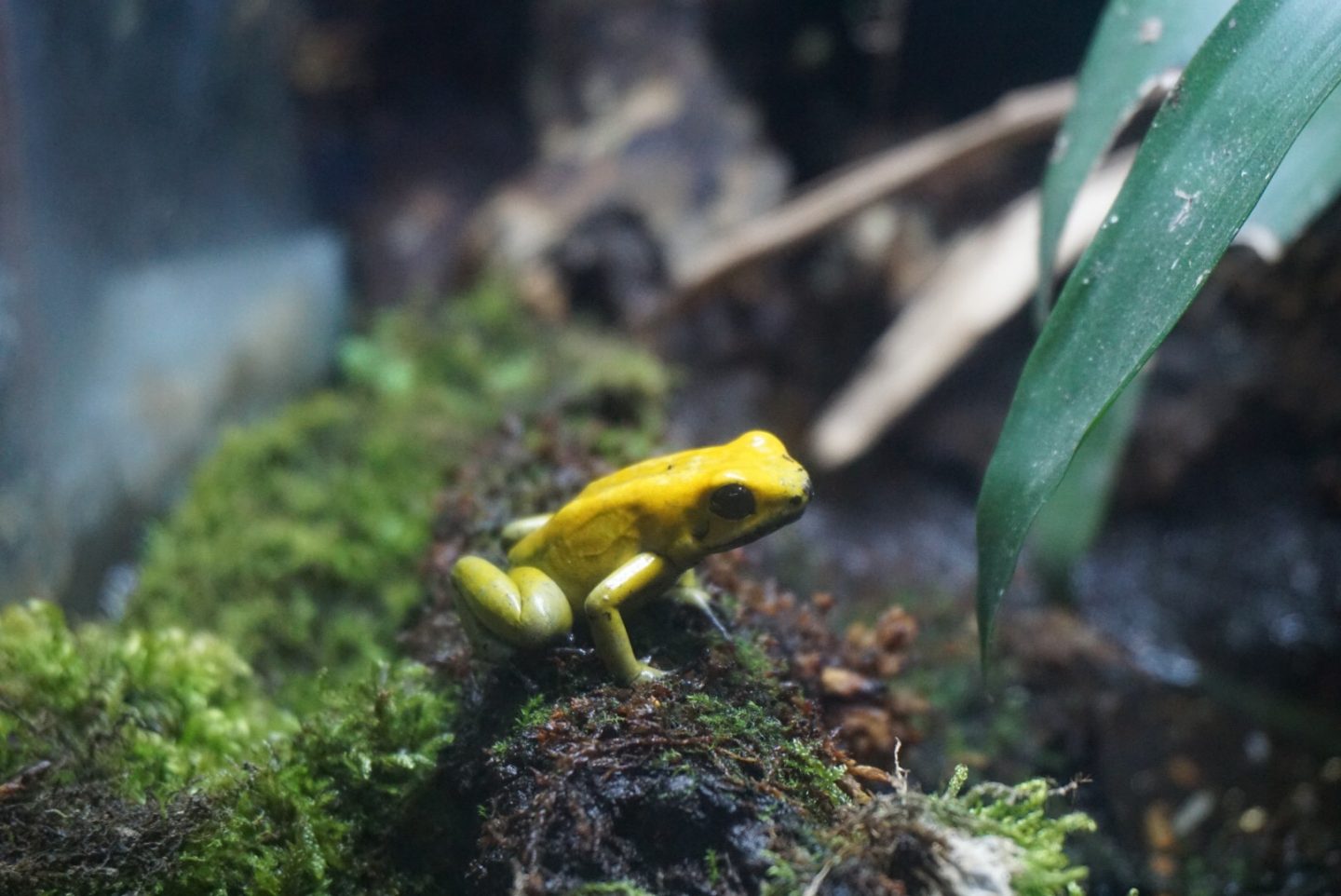 After a lovely few hours here, we headed off for a spot of lunch in Perth.  There may have been no phones on the tables, but Bonnie did manage to grab my makeup. 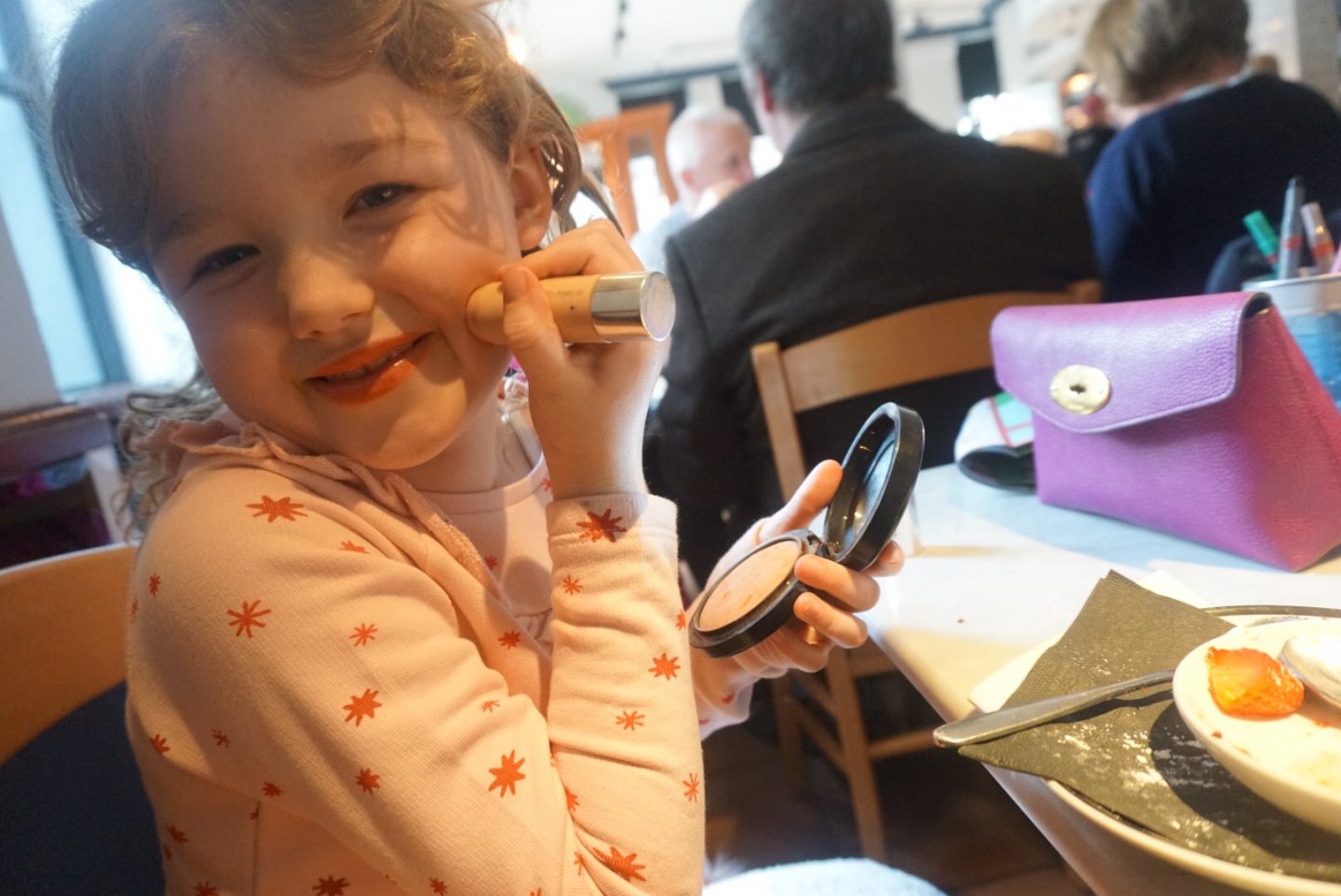 I last visited the Perth leisure pool around 23 years ago.  I have lovely memories of a family holiday in Fife and wanted to take the kids, now they can both swim.  I am also really keen to get to the pool in Dundee again soon as I have great memories there too, one involving my poor Dad getting swept into the rapid river.  It must have been rather scary for him given the fact he is registered blind.  We all joke about it now though and thankfully he can swim so he was okay, even if he did a bit of a fright. 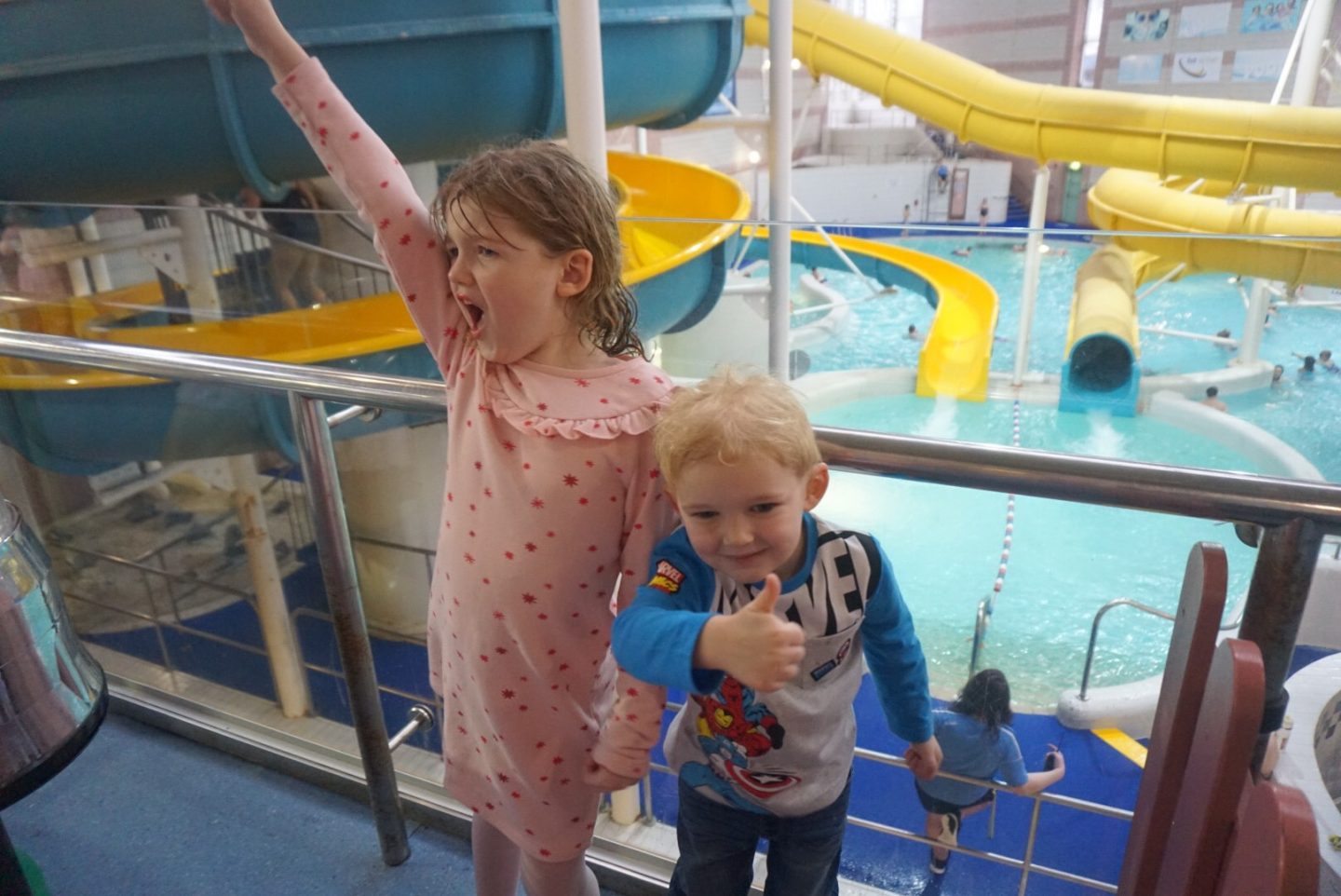 I am like a big kid when it comes to water slides. I love flumes and have many fond memories of going down them at the Commy Pool in Edinburgh. I am still gutted they took them all down. Those 4 flumes have very happy memories for me.
I made a bit of a mistake at Center Parcs in 2017, insisting Bonnie go down one of the tunnel flumes at 4 years old. I thought she would love it (Charlie sure would at 4 years old) but two years later and she assures me ‘Mummy, I was terrified’. As a result, she initially had a bit of a wobble and decided she wanted to go down on my knee. In the end she loved it and the flumes are great. I love the dark one, which is for 8-year olds plus (daring little Charlie was gutted). If you give yourself a decent push off, it goes really fast and the music and flashing lights add to the impact. I really enjoyed our time at the pool and didn’t want to leave. In fact, I enjoyed the day so much and the escape from general life that I really wanted to prolong the adventure and randomly book into a hotel on the way home. To my dismay, Hubs insisted we head home as he had taken king prawns out of the freezer for dinner. I think he did it on purpose, as he knows me too well. I love those days you don’t want to end.

Thanks to Deep Sea World for kindly gifting us the tickets.